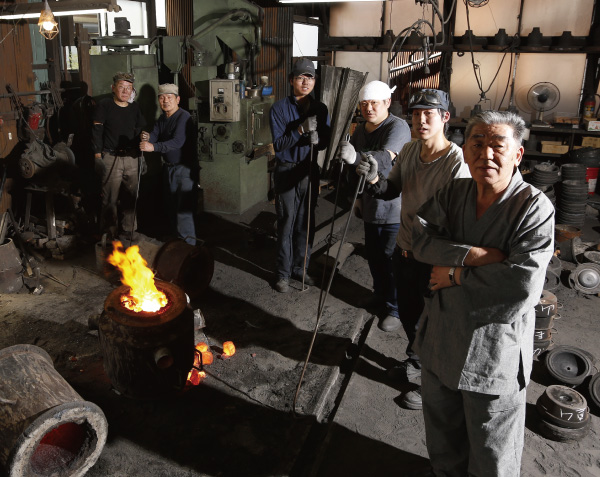 Since Edo period, now it's the 10th, the atelier which specializes in making 茶の湯釜 Iron Tea Pot and 鉄瓶 Iron Kettle.
In order to keeping excellent quality, even now, all works are handmade and the works are supported by only a few workers.

Beginning of the present Seikodo started from a small casting workshop by the 1st maker, 喜六 Kiroku in later Edo period in Domachi, Yamagata-city where have flourished with casting industry.
Later on, the technique was passed down to the descendant, the 6th 徳太郎 Tokutaro who was good at making 羽広鉄瓶 Habiro Iron Kettle named the workshop Seikodo.
The 7th 善太郎 Zentaro who was highly named for making Iron Tea Pot and Iron Kettle.
After World War II, the 8th 清光 Seiko established the base of Seikodo which specialized in making Iron Tea Pot with his great technique and his artistic talent.
Now the 9th 旺光 Oko and the 10th 琢実 Takumi are following in the footsteps of the ancestors to devote all their energy in making as a specialized atelier of Iron Tea Pot and Iron Kettle that are filled with service.
茶道 Chado is one of the Japanese traditional culture.
Since holding 茶事 Tea Party itself expresses only to place 釜 Iron Pot in a tea room, the most important tool is Iron Tea Pot.
It said that Iron Tea Pot works on behalf of a host in a tea room because of its presence, even after the host left, it is still in the hearth and communicates with guests.
Enjoy the Japanese traditional beauty, 山形鋳物 Yamagata casting world.